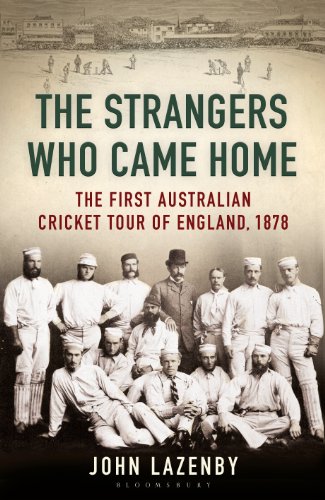 The Ashes cricket series, played out between England and Australia, is the oldest, and arguably the most keenly-contested rivalry, in international sport. And yet the majority of the first representative Australian cricket team to tour England in 1878 in fact regarded themselves as Englishmen.

In May of that year the SS City of Berlin docked at Liverpool, and the Australians stepped onto English ground to begin the inaugural first-class cricket tour of England by a representative overseas team. As they made their way south towards Lord's to play the MCC in the second match of the tour, the intrepid tourists, or 'the strangers' as they were referred to in the press, encountered arrogance and ignorance, cheating umpires and miserable weather. But by defeating a powerful MCC side which included W.G. Grace himself in a single afternoon's play, they turned English cricket on its head. The Lord's crowd, having openly laughed at the tourists, wildly celebrated a victory that has been described as 'arguably the most momentous six hours in cricket history' and claimed the Australians as their own.

The Strangers Who Came Home is a compelling social history which brings that momentous summer to life, telling the story of these extraordinary men who travelled thousands of miles, risking life and limb, playing 43 matches in England (as well as several in Philadelphia, America, on their return journey) during a demanding but ultimately triumphant homecoming; how their glorious achievements on the field of play threw open the doors to international sports touring, and how these men from the colonies provided the stimulus for Australian nationhood through their sporting success and brought unprecedented vitality to international cricket.
Libros Relacionados